Some of the most important rivers of Europe have their origins in the Alps. This doesn’t come as a surprise considering that Europe’s largest fresh water reservoir is located here. Each year, more than 200 billion cubic meters of water drain out of the basin. The Alps act as one of Europe’s most important watersheds and their drainage takes place in three main directions: South to the Mediterranean and the Adriatic Sea, north-west to the North Sea and east via the Danube to the Black Sea.

Learn more with our infographic of the 15 longest Alpine rivers.

Our wall map “Explore the Alps“. The map to draw in your own special places.

Most of the larger Alpine towns are situated at the outlets of the Alpine rivers in the foreland. In addition to the drinking water supply, for example, for big cities like Munich and Vienna, the rivers of the Alps also play an important role as a transport route and in the generation of hydroelectricity. Since the 20th century, the Alpine waters, and thus also the rivers, have been used increasingly for tourism.

Some of Europe’s most important rivers, such as the Rhine, Rhone and Po, originate directly in the Alps. With Sava, Inn and Drau, three of the four most water-rich tributaries of the Danube flow into Europe’s second longest river, even if the Danube itself does not flow directly through the Alpine region. 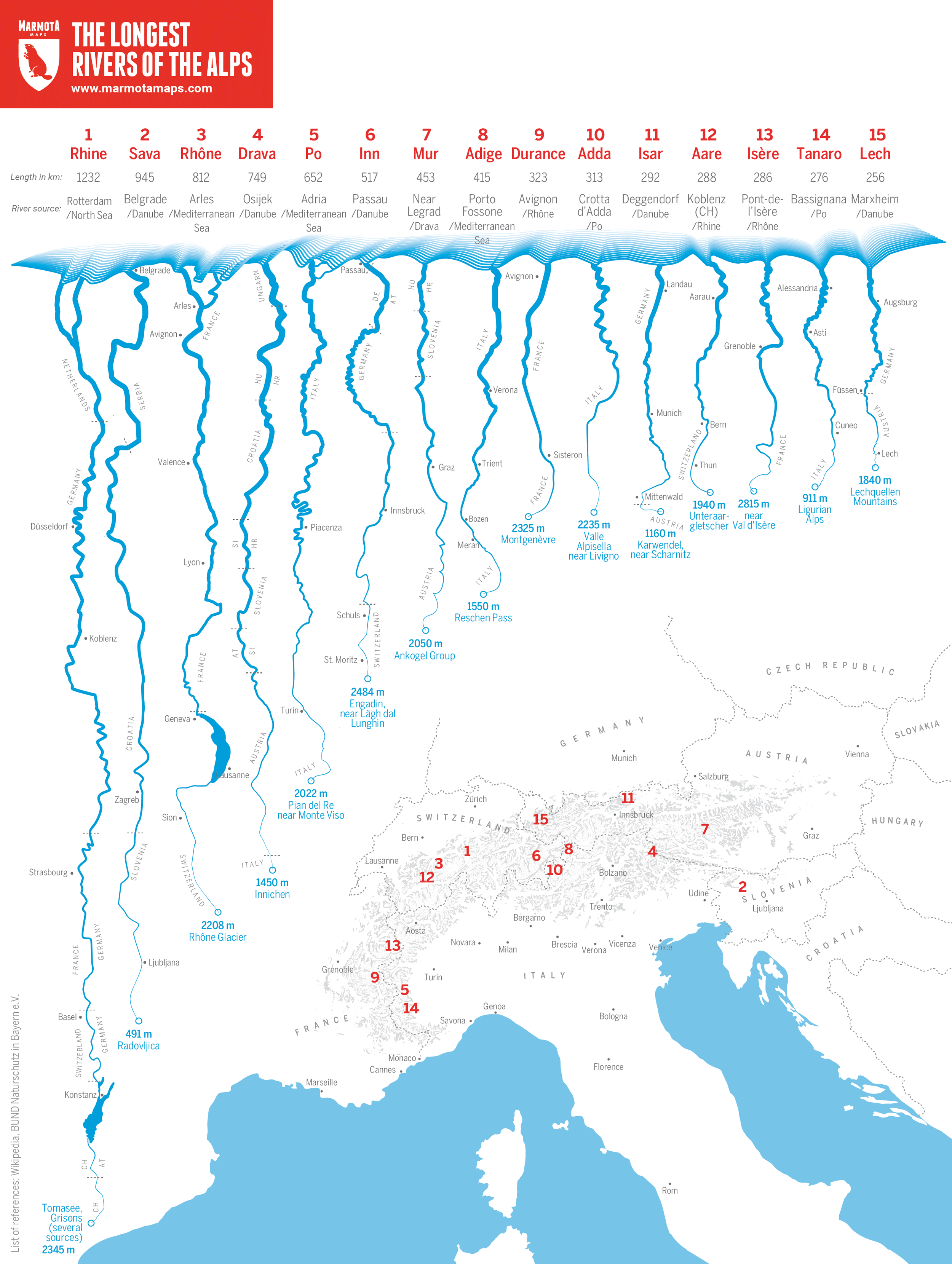 The Rhine — from Graubünden to the North Sea

The most powerful and by far the longest Alpine river is the Rhine with a total length of 1,232 kilometers. It originates in the Swiss canton of Graubünden, where the Anterior Rhine and the Posterior Rhine merge. The Rhine forms the border between Switzerland and Liechtenstein and, further downstream, the border between Switzerland and Austria, before it flows through Lake Constance. At the confluence of the two near Stein am Rhein, the High Rhine begins. It forms the border between Switzerland in the south and Germany in the north. After Basel the Upper Rhine becomes navigable and turns into the German-French border river, before it becomes the Middle and Lower Rhine. It then crosses the German-Dutch border and finally flows into the North Sea near Rotterdam, around Europe’s largest seaport.

Sava and Inn — the Danube tributaries

The second longest Alpine river, the Sava, originates in the Julian Alps, in the area around the Triglav in Slovenia. It is the largest river in Slovenia and Croatia, where it flows through the respective capitals Ljubljana and Zagreb. After 945 kilometers, the Sava finally flows into the Danube in Belgrade via Bosnia-Herzegovina and Serbia.

Another important tributary of the Danube is the Inn, a particularly diverse river that flows through the Alpine region for about two-thirds of its total length of 517 kilometers. Like the Rhine, it also originates in Graubünden, namely in the Engadin. In Passau, the Inn finally flows into the Danube. Ever since the 12th century the Inn has been an important economic route. In the 20th century, between 1928 and 1976, four Olympic Winter Games were held on its banks in St. Moritz and Innsbruck, which also owes its name to the river. Even today, the Inn is still a popular destination for sports enthusiasts. Especially in the upper course of the river suitable sections for whitewater rafting tours can be found. The Inn is not only important for tourism but also for power generation. More than 20 of the 500 hydropower plants in the Alps use the energy of the Inn. Even though electricity generated from hydropower is considered clean, its usage is oftentimes problematic for the environment. River courses are changed and straightened and only about 10% of the Alpine rivers are considered to flow naturally.

The Rhone — from Valais to the Mediterranean

At 812 kilometers long, the Rhone is not France’s longest river, but it is the most water-rich. It has its source in the Rhône Glacier in Valais. In the German-speaking part of Switzerland it is also known as Rotten. In Switzerland, the Rhone flows through Sion and Lake Geneva and continues into France. The largest city by the river is Lyon. There, the largest tributary, the Saône, flows into the Rhone, which then flows south to the Mediterranean estuary, the Rhone delta in southern France. The Rhone has been an important shipping route for the region for centuries. Today, it is also navigable from Lyon to the estuary for larger ships. Parts of the river have been straightened so that by now the Rhone resembles a canal.

Adige and Po — the Adriatic tributaries

Italy’s longest river, the Po, flows over a length of 652 kilometers. It has its source in the Cottian Alps, in Piedmont, on the north side of Monte Viso. On the western bank of the Po, near Turin, the Po Valley opens up. Named after the river, the Po valley is Italy’s most important economic region. Nowadays, the Po is indispensable, especially for agricultural irrigation in the region. In a huge delta, the Po finally flows into the Adriatic Sea near Venice.

Only a few kilometers further north lies the estuary of the Adige, which is Italy’s second longest river at a length of 415 kilometres. With its source located in the Ötztal Alps in South Tyrol, the Adige flows through Lake Resia, Vinschgau, Merano and Bolzano and passes Lake Garda in the west. In the lower course of the river, after Verona, many connections between the Adige and Po rivers can be found. Since the 19th century, the course of the Adige has been changed and straightened in many places to regulate flooding and generate energy.

Our infographics show the courses of the 15 longest rivers, which originate in the Alps, from their sources to their estuaries.
A printed version of these graphics in German can be found in the ALPS Magazine (37/2018).

Welcome to the Marmota Maps Blog. This is all about the Alps, maps, design and infographics.

Map of the Alps
with 609 ski resorts

Map of the Alps
with 1001 mountains

The map in which you can draw in your own special places in the Alps - summits, passes, valleys, creeks, forests, alpine pastures, ski-, biking- or hiking trails, villages and regions.
€ 25

Quartet of the
mountains of the Alps

32 illustrated Alpine mountains from all eight Alpine countries, information on each mountain and five categoriesb
Only available in German.
€ 12