Galdhøpiggen is the highest mountain of Norway and of Scandinavia. This alone makes it a popular destination for climbers. Three large glaciers cover the northern, western, and southern slopes of the mountain. This makes the mostly glacier-free route from the east the easiest summit-route, which does not involve any technical climbing. For a long time the Glittertind, situated only a few kilometers east of Galdhøpiggen, was considered the higher of the two summits. Since the glaciers on top of Glittertind strongly decreased in recent years it lost so much height though, that today it is only Norway's second highest mountain. Galdhøpiggen on our Ski Resorts of Scandinavia map

All 299 ski resorts in Norway, Sweden and Finland on one map. 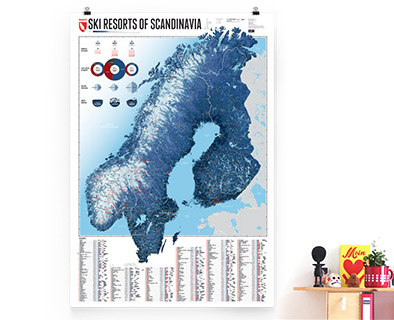