The Seven Summits, the seven continental high points on earth as illustrated prints. Is Mont Blanc one of the Seven Summits? 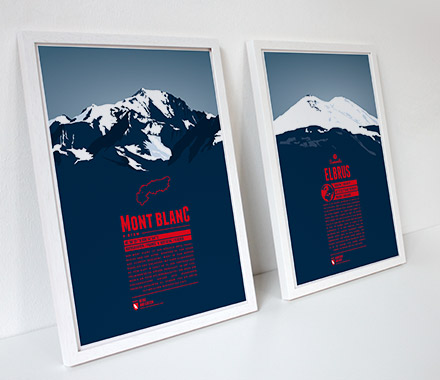 The Seven Summits are the seven continental high points on Earth. Which mountains exactly are considered as the Seven Summits depends on where the continental borders are drawn. Geological, cultural, and political reasons can play a role, as well as mountaineering considerations. We selected the Seven Summits according to the Messner list. Mostly undisputed from this list are Mount Everest for Asia, Aconcagua for South America, Denali for North America, Kilimandscharo for Africa, and Mount Vinson for Antarctica.
Elbrus in the Caucasus is often seen as Europe's highest summit. However there is also some strong arguments for Elbrus being an Asian mountain, which would make Mont Blanc in the Alps Europe's highest peak.
In the case of Oceania some argue that it might be its own continent, separated from Australia, which would mean that there should be a list of eight continental high points. Others see the Oceanian islands as no continent at all. And a third group counts Puncak Jaya on New Guinea as Asian, since it is part of Indonesia. So Mount Wilhelm in Papua New Guinea, and Mount Kosciuszko in Australia are possible alternative candidates for the list of Seven Summits.

Mountains of the Earth

Discover all Seven Summits, their possible alternatives and over 500 other mountains on our large world map.