The World
of Animals 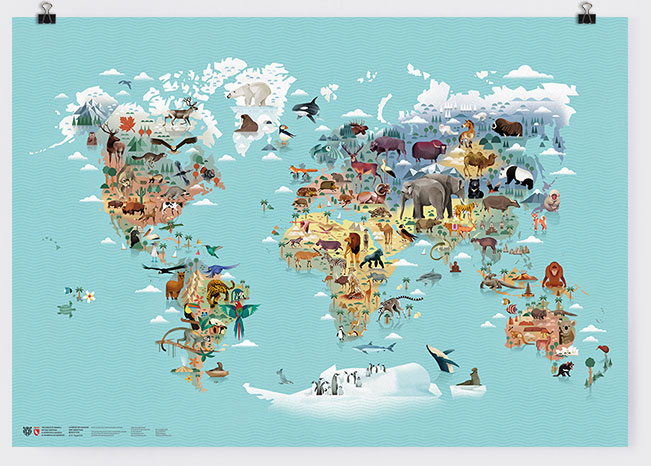 A world map with the most famous, most beautiful, and most interesting animals in all regions around the globe. Illustrated with love by Dieter Braun.

The world of animals is incredibly diverse, it is fascinating and astonishing for the young and old - and now it is available for every kid's room, or living room.

For the first time “the World of Animals” shows Dieter Braun's famous animal illustrations together with new drawings on one poster. Almost 100 animals populate this beautiful world map. From the polar bear on Greenland to the penguins in Antarctica. Familiar animals as the fox, the wild boar, or the stork in Europe, famous animals as the zebra, the gorilla, or the lion in Africa, exotic animals as the colorful parrots in the South American jungle, the tiger, and the giant panda in Asia, or the kangaroo in Australia, the mighty inhabitans of the oceans as the orca, the walrus, or the elephant seal, or less known animals as the ring-tailed lemur on Madagascar, or the Japanese macaque. These and many more animals are only waiting to be discovered by children and their parents.
The world map shows the different climate zones, the topography, like the Andes or the Himalayas, the vegetation of the different countries, and important landmarks, as the Fuji, the Pyramids, or Angkor Wat. Thus children and parents can get to know the different animals and explore their habitats.
All animals, the landscapes, continents, and oceans were illustrated with love in Dieter Braun's distinctive style. “The World of Animals” is great fun for small and grown-up explorers and raises the interest for close and far areas around the globe.

The world of European animals: The moose in Scandinavia, the fox on the British isles, the marmot in the Alps and the wisent in Eastern Europe. 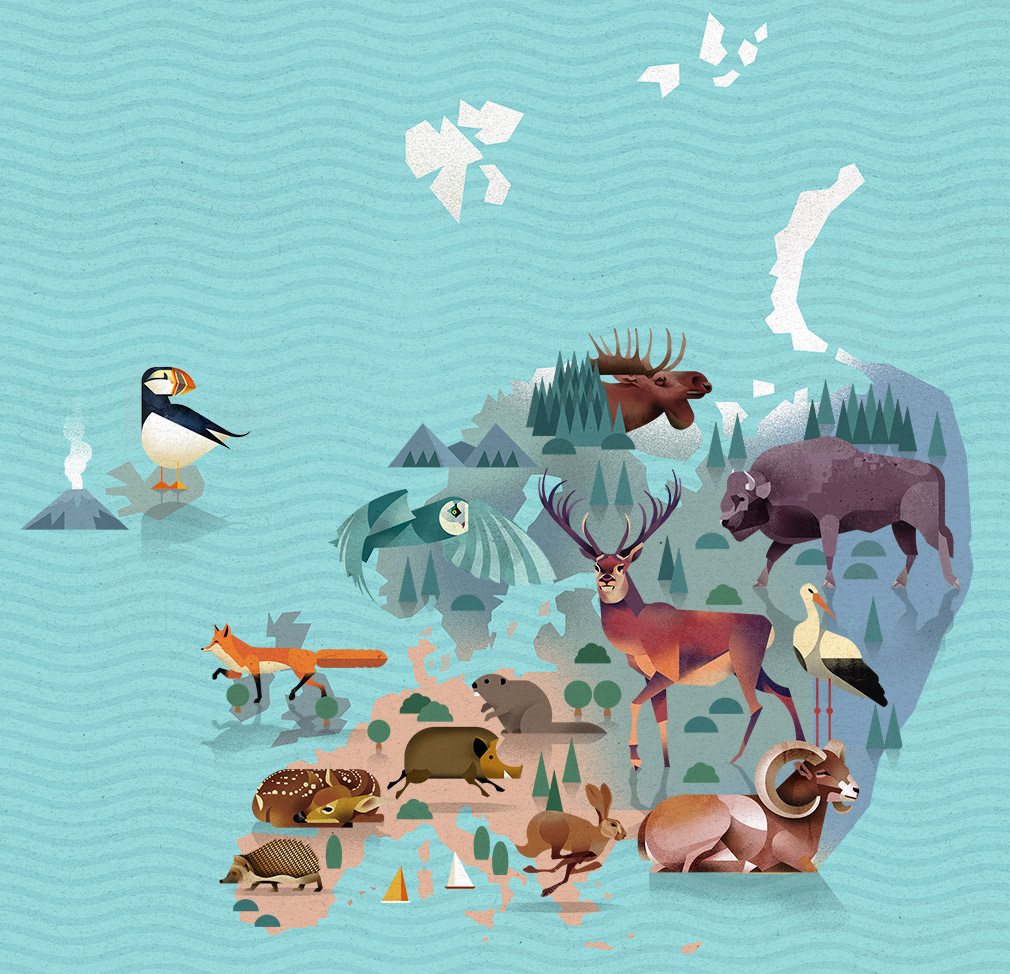 The world of Asian animals: The dromedary on the Arabian peninsula, the Arctic fox in Siberia, Indian tigers and Chinese Giant pandas. 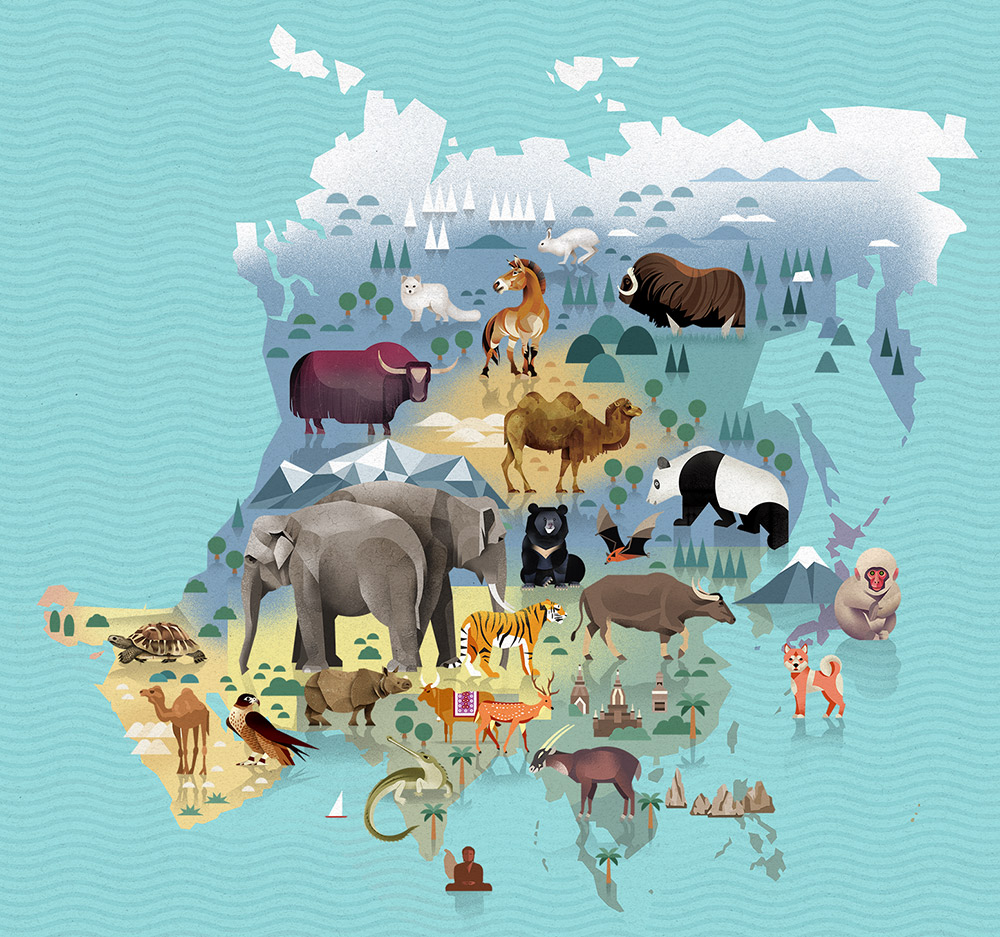 The world of North American animals: Polar bears on Greenland, the beaver in Alaska, cougars in the Rocky Mountains and alligators in Florida. 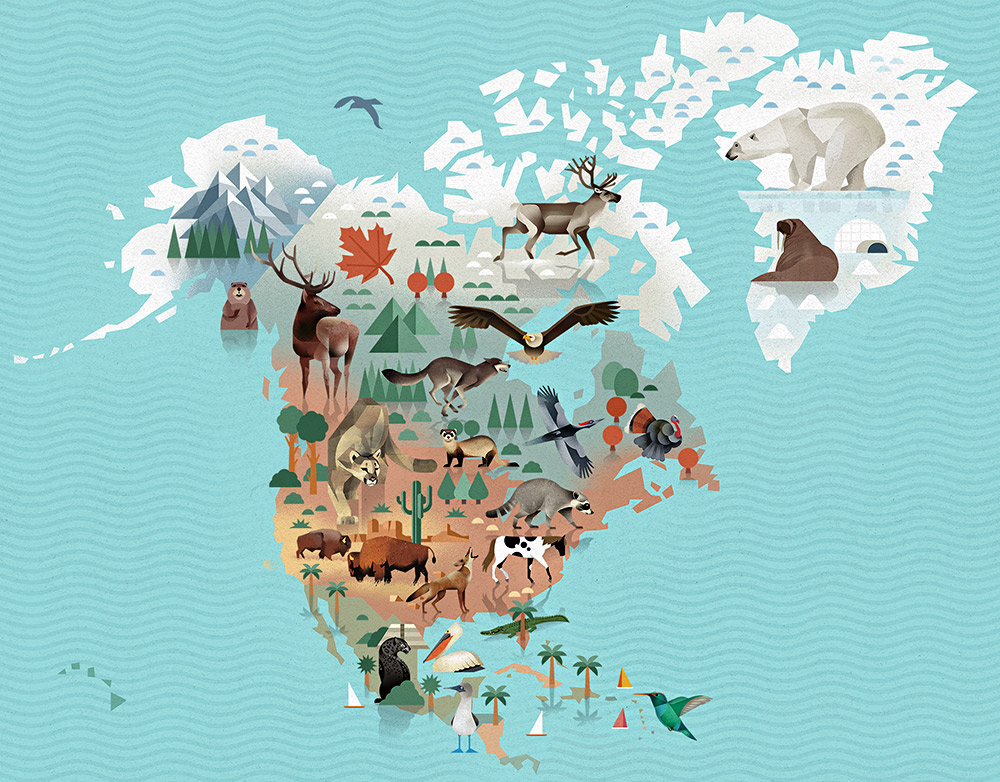 The world of South American animals: The llama in the Andes, macaws in the jungle and the seal in Tierra del Fuego. 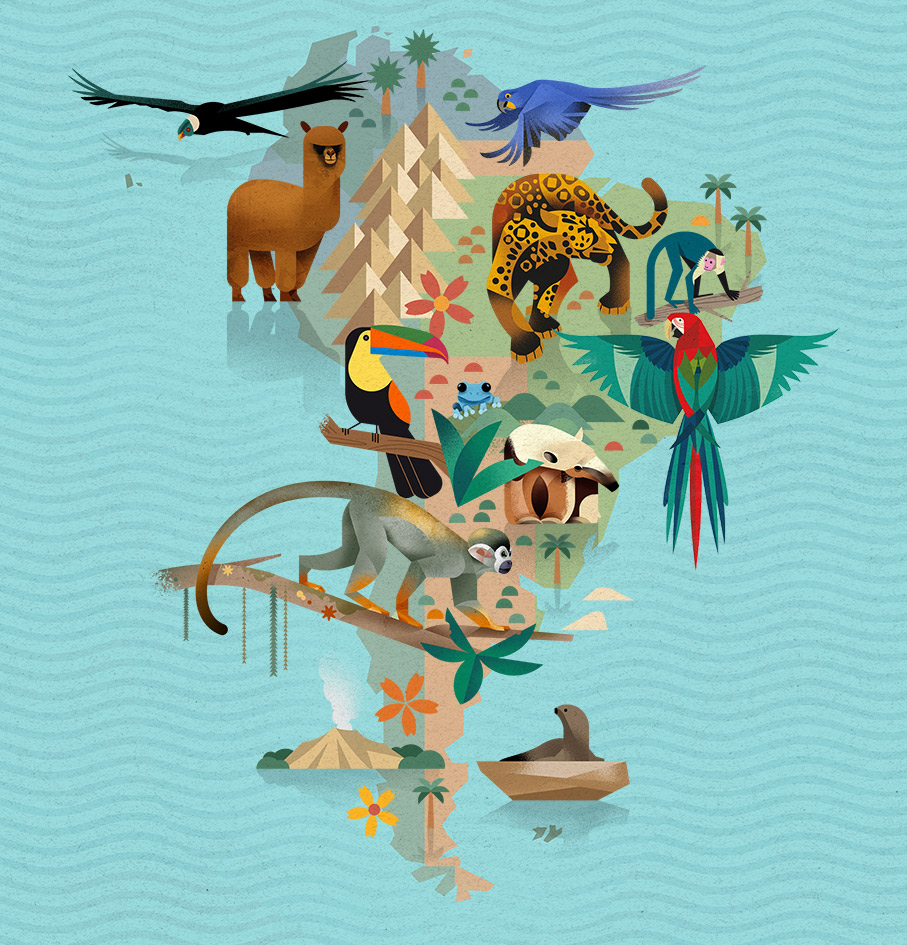 The world of African animals: Lions and zebras in the savanna, gorillas in the rain forrest, penguins at the Cape of Good Hope. 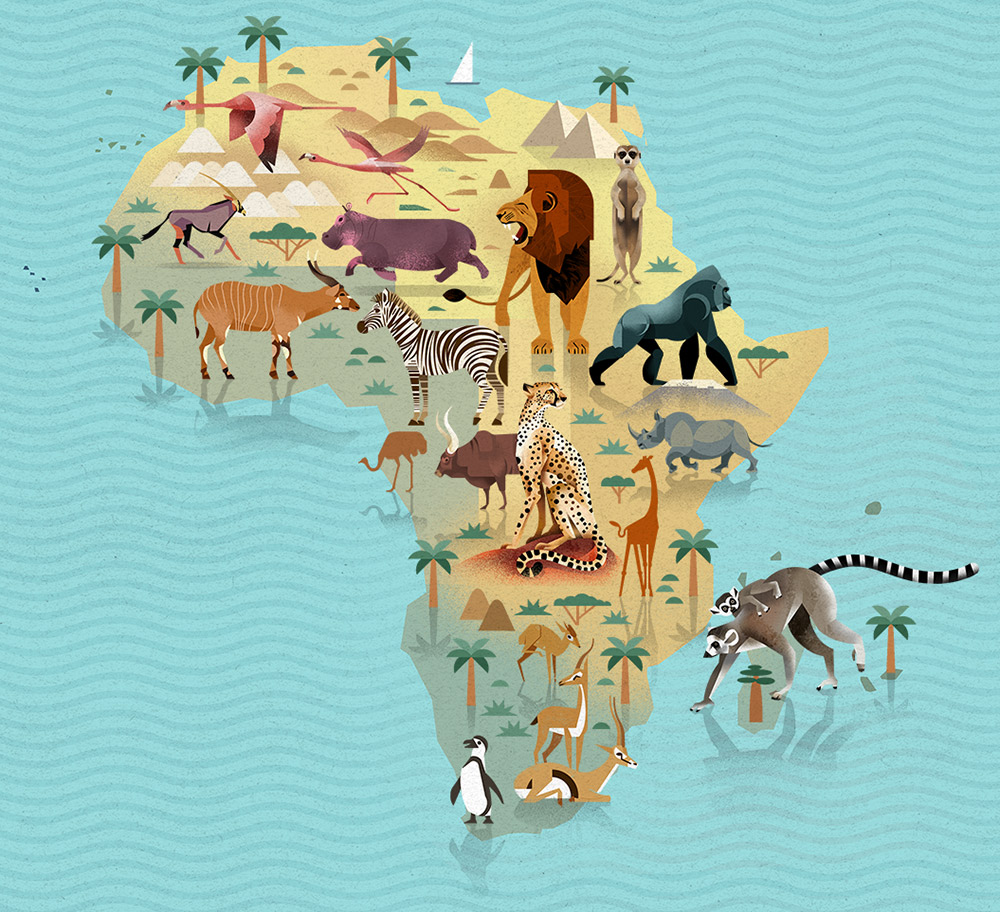 The world of animals of Australia and Oceania: Orangutans on New Guinea, koalas and kangaroos in Australia, and the kiwi in New Zealand. 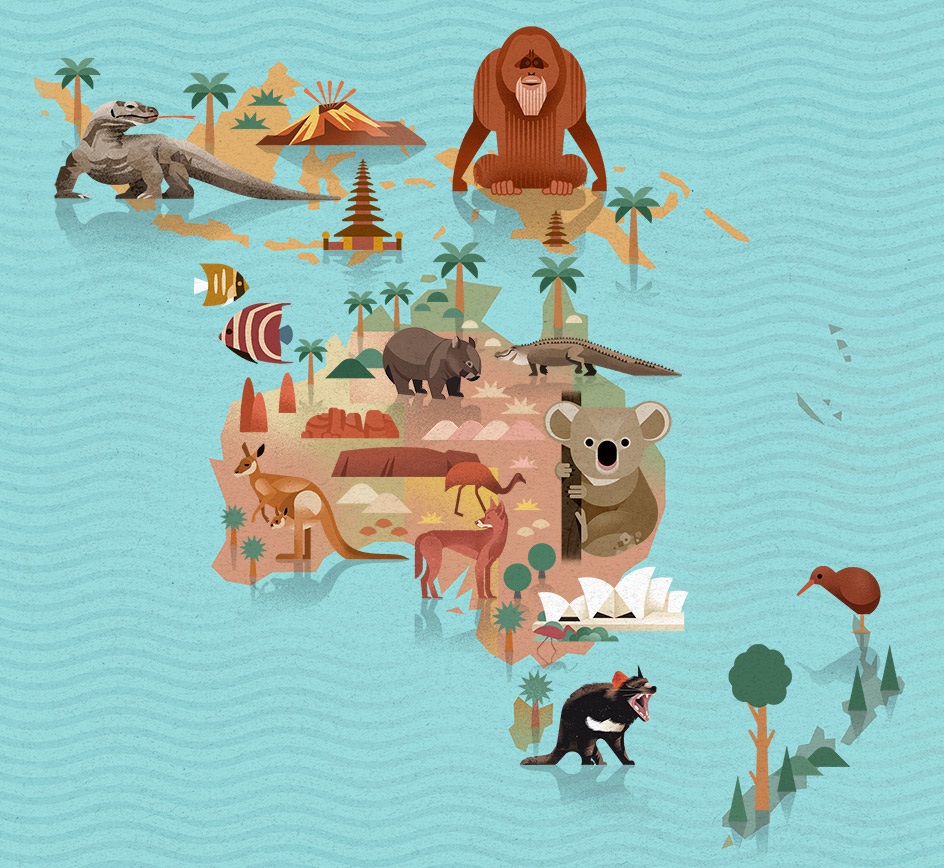 The animals of Antarctica know how to protect themselves against the extreme cold: Emperor penguins, the elephant seal and the humpback whale.

Since the 1990s Dieter Braun is living in the city of Hamburg and working as a successful illustrator and author of children's books. His iconic drawing style, graphically reduced with muted colors, is famous. Dieter Braun's books are sold around the globe and have been translated into more than ten languages. His unique drawings are not only embraced by children and their parents. They also adorn magazines such as Die Zeit, Geo, Stern, WWF Magazin, Wall Street Journal, or Forbes Magazine. Animal illustrations are Dieter Braun's great passions and are among his best-known art works.

The “World of Animals” is his first project, published in cooperation with Marmota Maps.

The World of Alpine animals

You are particularly curious about the animals in the Alpine region? Get to know them with our poster and our quartet card game of the Alpine animals. 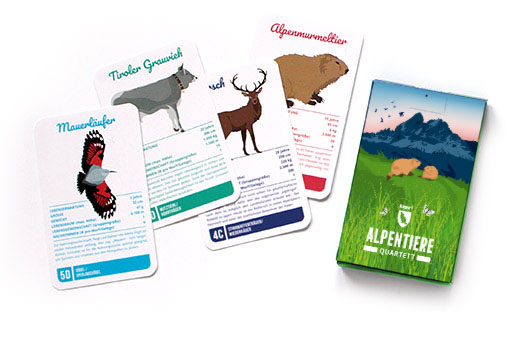 Maps and prints
on other materials

Our products behind acrylic glass, on aluminium composite, foamcore, and more. 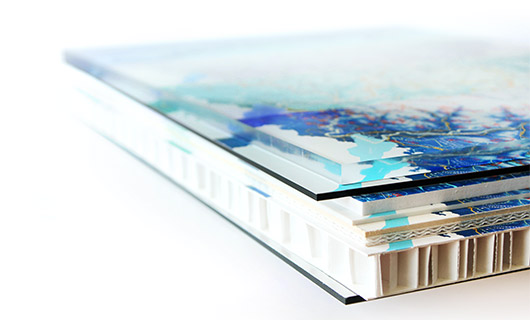