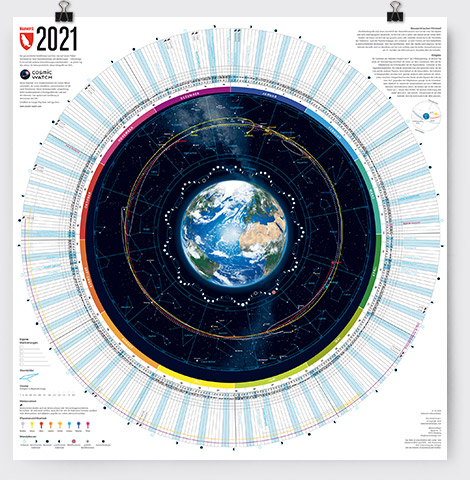 The geocentric sky and your personal year on one poster! With space for your own calendar entries for each day of the year - birthdays, celebrations, activities and more - to create your personal infographic of 2021.
Created in collaboration with Cosmic Watch.

The calendar is composed of a number of rings around the inner circle. From the outside to the inside these rings show: the moon phases, fields for personal notes, holidays (in Germany, Austria and Switzerland), and astronomical events, fields for your own markings, dates and days of the week, calendar weeks, and months.
Our infographic in the center shows the star firmament, the constellations and other objects in the sky which are visible from Earth throughout the year. 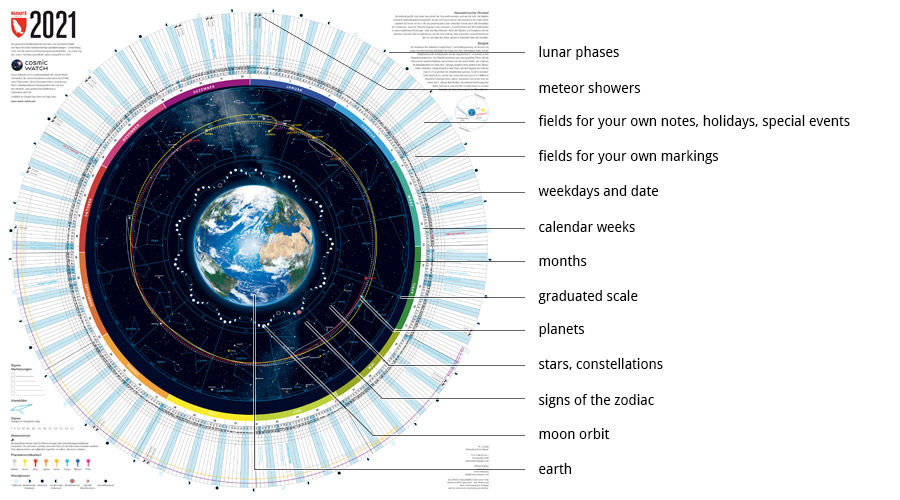 One large field offers space for personal notes from appointments to birthdays and other celebrations, your ski vacation or the hiking trip. Three other rings are intended for graphical markings, like for instance athletic activities, visits to the movies, or the theater, or your personal count of the days since you gave up smoking. At the end of the year you have created a personal, infographic over the course of your year. 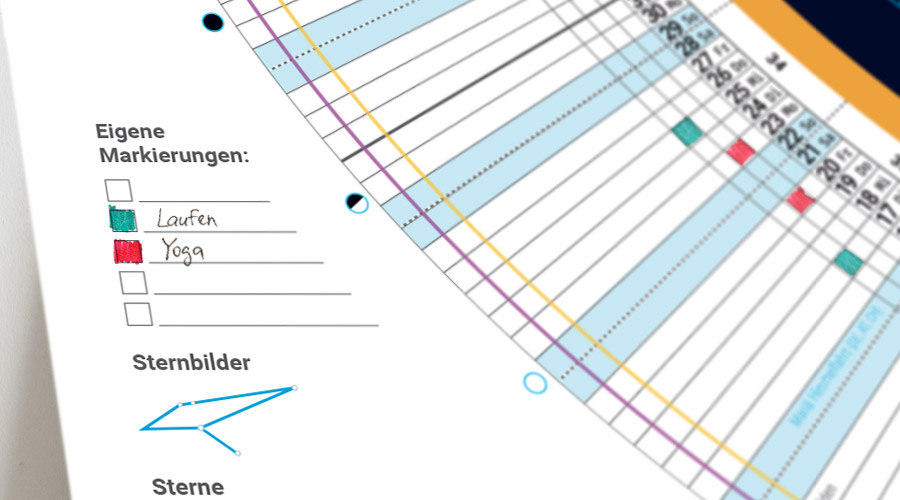 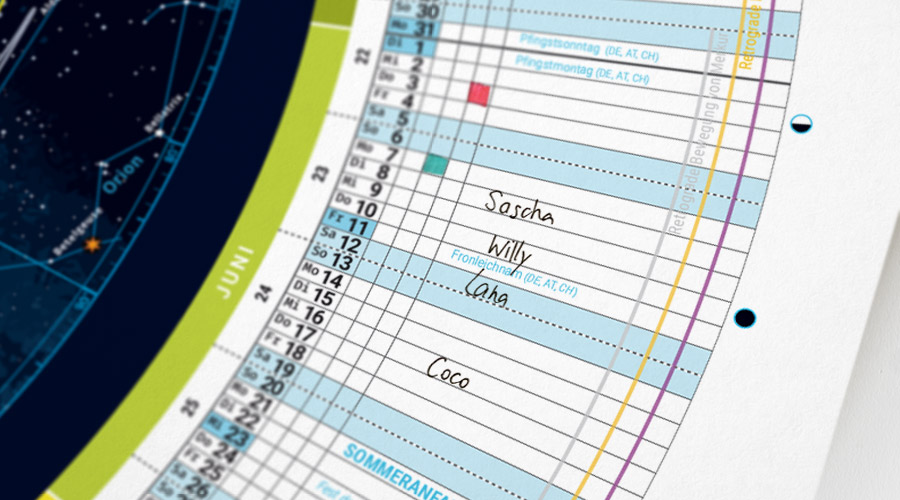 Imagine having a space ship and being able to hover in an orbit a few thousand kilometers above Earth. In astronomical scales your position is practically still almost the same as on Earth itself. The view of the night sky appears very different though. This geocentric sky is shown on our calendar. This means that not all objects and events on the calendar are visible from everywhere on Earth. For instance the solar eclipse on 10th June 2021 will be visible over the Arctic Ocean, the eclipse on 4th December will be visible in Antarctica. 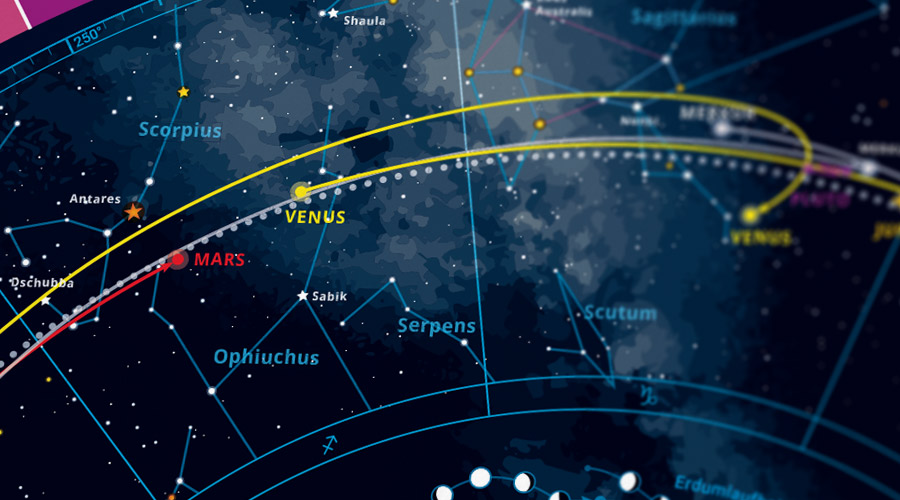 Since Earth and the other planets in our solar system are moving in different orbits and with different velocity, seen from Earth the planets appear to be moving over the night sky. Most of the time the movement of the planets appears to be directed to the west. If this seemingly movement changes direction we call this a retrograde movement. 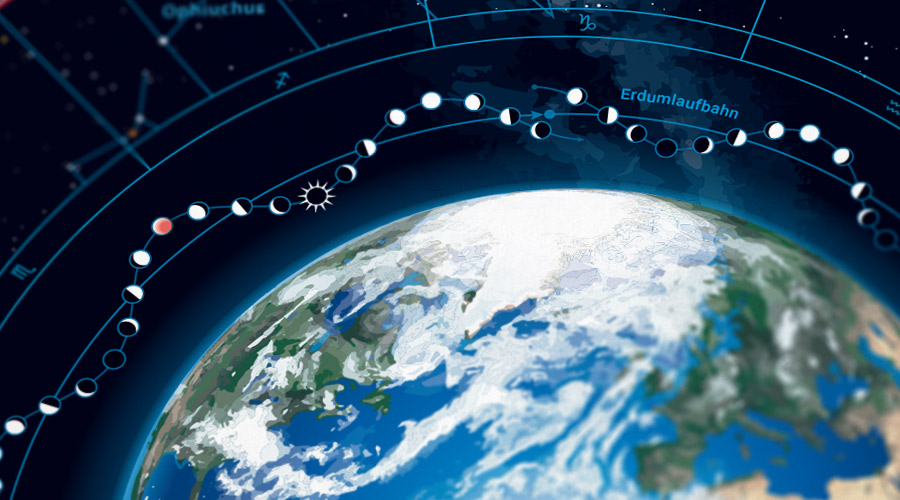 The calendar also shows the orbit of the Moon and the lunar phases. In average the moon's distance to Earth is about 385,000 kilometers. Since the orbit is not perfectly circular the distance varies during a month by more than 40,000 kilometers. 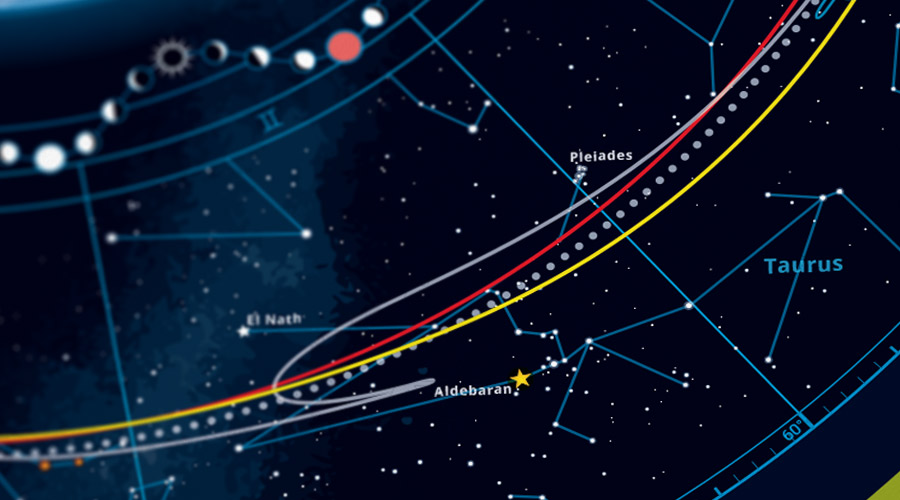 The calendar shows the most important stars and constellations. The constellations are shown at that time of the year when the Sun is positioned in front of them, as seen from Earth. Due to the Sun's brightness we are not able to see these stars during the day and at night we look at the part of the sky opposite of the Sun. This means, for instance, that we cannot see the constellation of the Gemini during the nights in June, but in winter.

The graduated scale of the calendar start with 0° at the beginning of spring. During the equinoxes in spring and fall the sun traverses the interception points of ecliptic and celestial equator, when day and night have the same length. 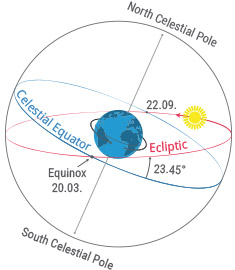 The ecliptic is an imaginary plane on which Earth and the other planets are rotating around the Sun. The axis of Earth is inclined by about 66,6° to this plane, which is why we have the different seasons on Earth. The celestial spehere around Earths' equator is inclined by about 23,4° towards the ecliptic.
Since Earth's orbit is not circular, but ecliptic the distance between Earth and Sun varies by about 5 million kilometers during one year. The closest distance, the perihelion, is reached on 2nd January. The farthest distance, the aphelion, is reached on 4th June. 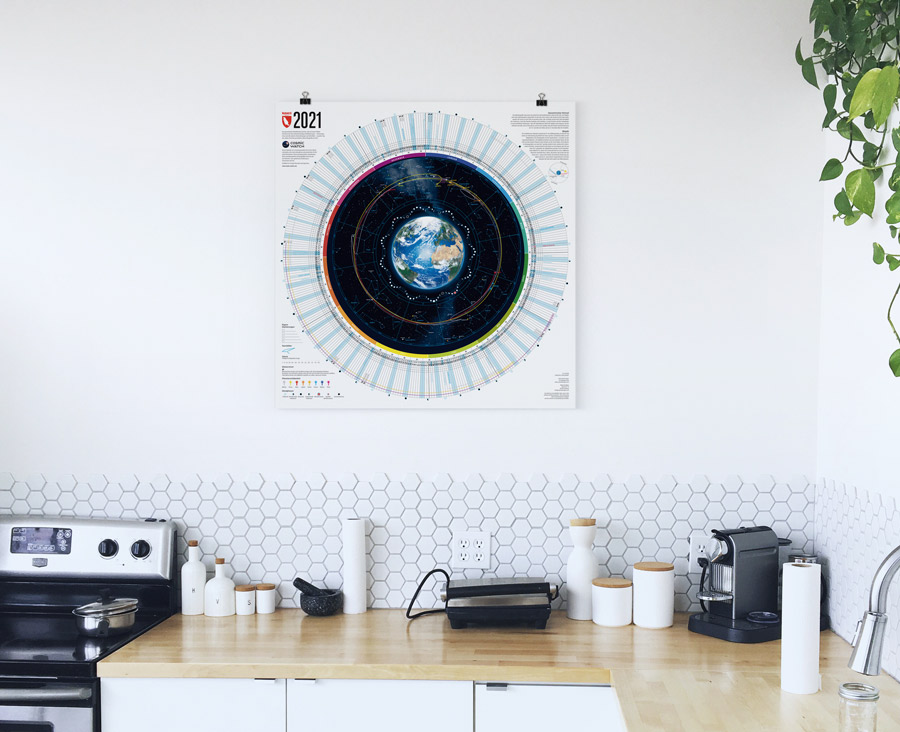 This calendar has been created in collaboration of Marmota Maps and Cosmic Watch, the first interactive 3D-clock with an integrated planetarium. This high-power tool shows breathtaking real-time images of the sky around Earth. A playful introduction into astronomy and time.
Available in Google Play Store and App Store.
www.cosmic-watch.com

The concept of the circular calendar

Our calendars are showing the whole year on one poster. For us the circle has the ideal shape for this. A year is illustrated as a closed phase.
The circle is also a matching symbol for rotational events which we experience each year. The length of the year is defined by the circular rotation of Earth around the Sun. After one year Earth returns to the same relative position in relation to the Sun. The succession of the seasons, of holidays and celebrations, also repeats itself each year in a circular flow.